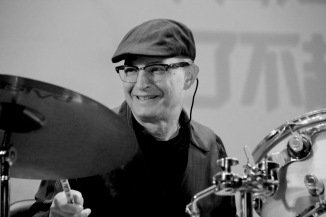 Larry Eagle keeps his musical portfolio diversified. He is a founding member of Bruce Springsteen’s Sessions Band; their album We Shall Overcome: The Seeger Sessions won a Grammy Award for traditional folk music and was followed by their Live in Dublin CD and DVD release. Eagle also played on John Legend’s second album, a Grammy-nominated blues album with the legendary Odetta, and 2015 and 2017 Grammy-nominated children’s albums with Brady Rymer and the Little Band That Could. Larry is a long-time member of NEA Heritage fellow (and Grammy nominee) Andy Statman‘s trio; in March of 2019 they played a sold-out concert at New York’s Carnegie Hall. He has recorded with artists ranging from country and bluegrass superstar Ricky Skaggs to powerful jazz/soul singer Lizz Wright. He continues to play and record with artists in a variety of genres; he performed on the traditional jazz stage with plectrum banjo artist Cynthia Sayer at the 2017 New Orleans Jazz & Heritage Festival (JazzFest), and with western swing artists Western Caravan at the 2017 and 2018 Fuji Rock Festivals in Japan. He has recently returned from his second concert and teaching tour in China, and has also performed on The Tonight Show, Late Night with Conan O’Brien, Good Morning America, PBS, the BBC, and an ice-breaking Baltic Sea ferry out of Naantali, Finland.